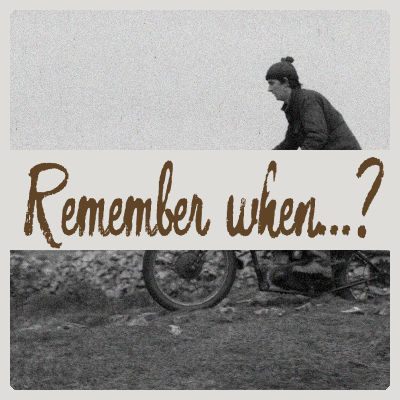 When I was in my teens, my parents separated. Since my mom was working full time, she had arranged for me to stay at relatives over the summer. That year, I stayed with my aunt, uncle and cousins. Remember the story where a storm caught us off guard while my cousin and I had our stamp collection spread out in the veranda? Check it out here. That is the summer that holds so many stories.

My aunt and uncle had three boys and no girl, so there wasn't any "girl toy" or "girl activity" over there. My uncle was a mechanic, and my cousins were really interested in cars, motors and such. The older two had motorcycles to ride mostly on the large lot. My uncle had a larger motorcycle. And here I was, the city girl who had never ridden on a motorcycle!

Give it a try

Probably a few days after I arrived there, my cousins wanted to go ride their motorcycles and of course, I didn't want to be left behind! So my uncle agreed to show me how to ride one. I sat on the seat and as he explained where to give gas and change the speed, I DID give gas. Good thing that my uncle was holding the handles because the bike drove off... without my weight on it.

The lesson was not too hard after that and I learned to ride that bike. It was a small one. In fact, I was using the smallest one, which was my younger cousin's, while he was taking the older one's bike and the older one would take my uncle's. Everyone was happy. There was a large field in front of the property, with tall grass, multiple paths and sand holes. That was perfect to keep us busy without going on the road.

One day, after an afternoon of riding our bikes, I came back to the cottage only to discover that my polyester pants had rubbed on the motorcycle's engine a bit too much and had melted. I remember how upset I was since those were my favorite pants. My aunt that the solution: turn them into shorts! It is surprising that although my pants had melted, over that whole summer, I never burnt my leg on that engine!

That summer of riding a motorcycle was the first and the last season for me on a such a machine. Although I would not mind going back and ride a bike in a field, remembering that summer, I probably would be too scared to ride it on the road, in traffic.

Did you ever ride a vehicle that was new to you? Something that scared you? or something that you had always dreamed of? Share your stories in the comments below.