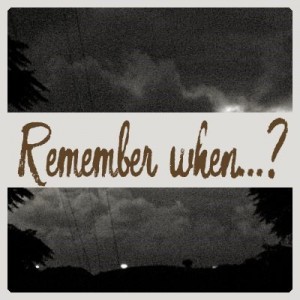 Storms are one of nature’s mean of communication: its way of yelling at us! Well, maybe not. But storms, in various forms, are part of life everywhere. Whether it is a tornado, a hurricane, a monsoon, a blizzard, we have all gone through many storms in our lifetime (and it is not over either). These storms can be the starting points of various life events, some sad, some interesting, some happy.

Have you ever been witness to a big storm? What surrounded that time? This can be yet another scrapbooking idea even if you don’t have a photo to prove that you were there. Will you record it?

It was a quiet afternoon

In 1974, i was staying with my aunt and cousins at their cottage in the country. The area was heavily wooded and it was said that to find the cottage, look for the two tallest pine trees, and the house was between them. That afternoon, i was sitting in the screened in porch with my cousin, sorting our stamps, as we were both collecting them. There was a very large table and we were sitting on opposite sides. Everything was fine and quiet. But that was about to change!

No time to sort

in a matter of just a few minutes, the wind picked up, and since we were sitting in the porch, that wind was moving our lightweight collectibles! But as they started swirling around we had to be fast: we grabbed whatever stamp we could get our hands on, and stuffed them in a bag or a box that was around. I probably picked some of his and he picked up some of mine, but that wind was increasing by the minute and we had no time to waste. Once we had picked up everything, we rushed inside.

Look at the pine!!

The house was between two pine trees, and they not only were very tall, but they also were very wide and one of them stood just a few feet from the cottage. Being that big, it was an easy catch for that wind. The swing hanging from the lowest branch (which was still about 15 feet high) was blown horizontally. Since the pine tree was so close to the house, we were afraid that either it would fall ON us, or if it was to fall the other way, it would lift the cottage by being uprooted.

We all gathered in the middle of the house, my uncle, my aunt, my three cousins and i, waiting for the storm to pass. Looking through the window we saw big branches flying left and right. Then, the power went out. Good thing it was the middle of the afternoon so it was light enough outside. We just waited there for what i felt was a long time, but i think it might have lasted less than 15 minutes. Then the wind died down.

Lucky for us, neither of the big pine trees fell. Going outside we immediately noticed branches on the ground everywhere. Even the pool was full of them. We proceeded to do some clean up. Since there was no power, we had plenty of time for that. After a couple of hours, my aunt decided to take a drive in town and see what had happened. We didn’t know what that was all about. The driveway from the cottage to the main road had a few small trees across so we had to clear those. Then, going in town, we saw more damage. Two things that really “impressed” me was to see the tobacco fields with all the plants fallen on the same side. Row after row after row. It was an odd sight. Then the telephone poles. They too were all leaning sideways, although they didn’t break. An old barn had fallen down.

We never really found out what had happened. It was too widespread and “mild” to be a tornado. It was too short to be the leftover of a hurricane. But it was still quite a story to tell whoever was not around!

If you actually are lucky enough to have some photos to accompany your stories, you can also check out Debbie Hodges weekly podcasts of Give your Photos Stories. Last week’s episode was also about big storms, so you might get even more inspiration!

How about you? Do you remember a storm in your childhood (or more recent)? Did you ever prepare for a storm coming (when you had a warning) or did you get hit by a sudden storm some day? Tell us about your stormy stories in the comment below.

See you next week.