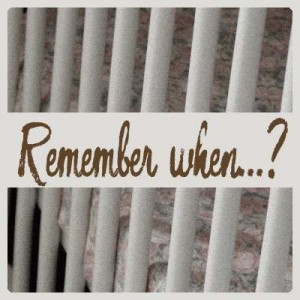 When we are kids, the world looks very different than it does to adults. Our perception is less mature, we don’t yet understand some situations, and even less, the inferences in the grownups’ language.

A baby in the family

I only have one brother, and he was born eight and a half years after me. This means that I have some clear memories of when HE was a baby.

My brother was born prematurely, and in the late 60’s, that was a bigger deal than it is now. He was 2 months premature, weighting only 3 pounds 14 ounces. That was tiny for the time. He stayed in the hospital for a month or so before coming home, shortly before Christmas. But he was still small when he came home at just 5 pounds.

My mom was obviously very concerned with this new baby and she would regularly go check on him, in the crib. She didn’t need to turn on the light or even bring a flashlight, even at night, since he had dark hair and it was easy enough to spot that dark spot in a light colored crib.

Where is the head?

One night, my mom, as usual, went to check on the baby, looking for the familiar “dark spot” in the crib. But she didn’t find it! She leaned forward to move the sheets or blankets, and felt something… on her thighs. The baby had gotten his head between the crib bars. I just remember hearing a scream and I ran to the bedroom, as did my dad. By then, my mom had had time to turn on the light to examine the situation.

Get me a saw

As a kid, did you ever misunderstood something that the adults said around you? Anything that caused you to be fearful? or hopeful? or really disappointed? Share your story with everyone.