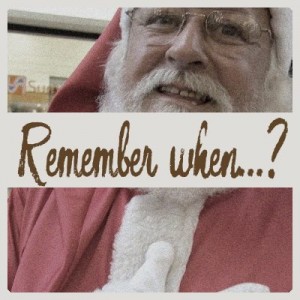 Remember when…? – Santa was here

Whether you celebrate Christmas or not, chances are that you have encountered this red dressed man.

What stories can you share about this character, or whatever event surrounded his presence?

When i was a kid, on Christmas day, we would all gather at my grand-parents’ house. All the aunts and uncles and cousins were there. Each year, one of my uncles would be designated to play Santa.

The designated actor would go down to the basement, then would change into a nice Santa suit, and while the kids were busy, he would proceed to leave the house through the garage door to the sidewalk. That is when he started ringing a loud bell and announce his arrival. All the kids would then rush to the window, then to the door to greet the jolly Santa.

Who is in the bathroom?

Since all my uncles had kids, there was always the odd chance that one cousin would notice the absence of one adult. What would we say to the child to explain that missing dad or uncle? Grandma was clever as she had thought of locking the bathroom door so the answer was always “Oh, he went to the bathroom”. That was usually sufficient for the child to get back to business with Santa. And of course, since it was locked, nobody would use that bathroom accidentally and blow Santa’s cover.

After Santa had delivered his one present per child, he would just leave, waving to the kids who were just anxious to start playing with their new toy, forgetting about the missing adult and the locked bathroom. That made it easy for Santa to come back through the garage door, change, come back where all the kids were and get the bathroom door unlocked.

I don’t remember any kid questioning this scenario. And as i grew older, i learned the secret but i kept it for the younger crowd!

Here is my layout with this story. 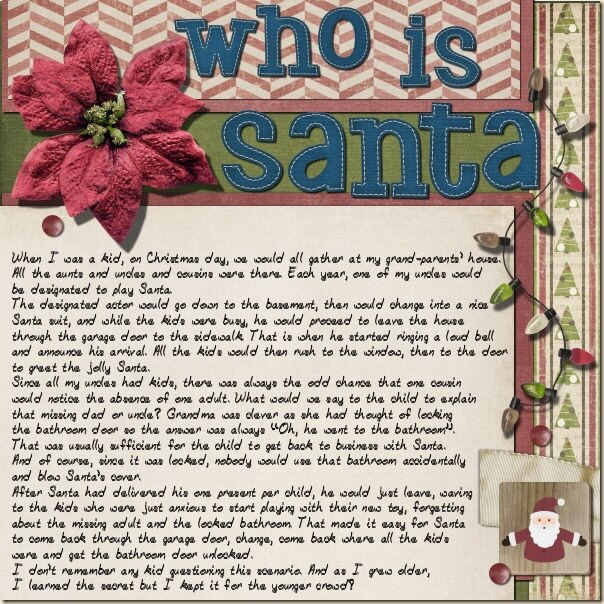 What is your story about Santa? Do you have a photo of it? Did you make a layout about it? Share with us. In the comments below, you can tell us as much or as little as you want; maybe the whole story, maybe just a couple of sentences to summarize it, maybe a link to a blog post on your site, or to the layout you will do with this prompt. This is only the beginning!

Onto the next prompt here.

7 thoughts on “Remember when…? – Santa was here”