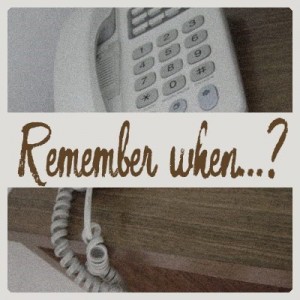 Remember when…? – On the phone

Almost everyone and his brother now has a portable phone, whether it is a top of the line smart phone, or a less advanced flip phone. How many stories do you have related to a phone, even an old one?

Many years ago, as i had a job out of town, if i wanted to call home, i had to make it a collect call. Back in those days, there was no automated system to do that, so we had to dial “0” and talk to an operator who would do that task and ask the person if they accepted the charges.

One day, as i was calling home, i did go through the operator to make the required collect call. So the lady dialled the number and waited for someone to answer. It took a while but finally, someone picked up the phone. But nobody was saying anything. No “Hello?”. Nothing. Then the operator kept saying “Hello? Hello? Hello?” hoping someone would respond.

The lady, probably familiar with various situations, asked me if there were children at home, assuming that a young child might have picked up the phone not knowing what to do with it. I replied “No, there are no children, only cats.” She clearly giggled but kept going “Hello? Hello? Is there someone?” Still no answer.

After a period of time that seemed quite long (that lady was very patient), we both heard a distinct “Meow” in the phone. We both burst out laughing. And then again “Meow”. Of course, the cat didn’t accept the charges for the collect call, but that is when i discovered that one of my cats was answering the phone for me.

This event explained why we would often come home and the phone was off the hook. We only happened to see this unusual behavior in action several weeks later, when, sitting in the living room, we saw the cat jump onto the phone table as soon as the phone rang, and push the receiver with her head before we even had time to get up.

So our cat, Boots, was our personal receptionist. And believe it or not, she also happened to hang up, once in a while after the calls! And no, we don’t have a video of this amazing cat skill.

As you can see, this week, i didn’t make a layout for this story. I might, or I might not do one in the future, when i have more time, but even if i don’t create a layout, my story is down on paper (or should i say, on the computer!)

What is your story about a phone? Did you ever receive an unexpected phone call? Did someone play a trick on you over the phone? Or, is this story make you think of something related to a pet? Share your story.

Did you miss last week's story? No problem, read it HERE.