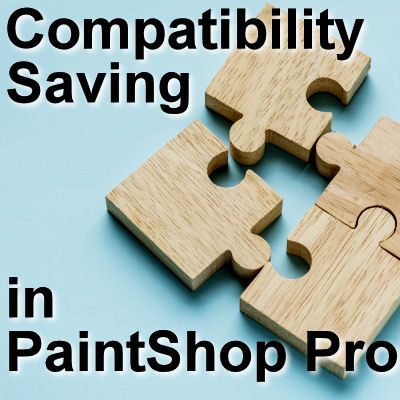 Over the years, Corel has released many versions of PaintShop Pro with new features and new tools. Although these are welcome additions, they come with some hidden issues when you want to share your projects with others: compatibility.

If you are using a recent version of PaintShop Pro to create a project, you will often want to save it in .pspimage format, so you can edit it later. This format will retain all the features of the version you are using, so if you share it with someone who uses a different version to open it, the expected tools and features might be different.

Of course, you know the file is valid, but your older version of PaintShop Pro just won't recognize it. Unfortunately, you don't have any way to change the file to open it in your version.

In order to avoid this issue whenever you want to share your .pspimage files,  make some adjustments when you save the file. When you go to Save as... and get to the point where you will choose the name, click on the Options... button.

This will offer you additional options, including the compatibility mode. 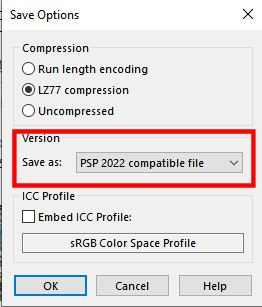 Once you click on the arrow to open the options, you will see these:

If you want to share your .pspimage file with someone who uses an earlier version of PaintShop Pro, you should choose what version you want it to be compatible with. That is simple, right? Not exactly.

What compatibility mode to choose?

Unfortunately, choosing which compatibility mode to select is not as simple as picking the oldest possible one. Since some tools and features from recent versions won't be read by earlier versions, even if the user can open the file, some information can be lost. So you need to determine what tools or features you used and want to retain, before choosing a compatibility mode.

If you are using PSP2022, and used the new Frame tool, choosing an earlier compatibility will lose the features of the tool and will convert the frame group into a mask group. It might not be so bad, but it still will just lose the features specific to that tool. When you save a file using the Frame tool, using an earlier compatibility mode, you will get a warning window letting you know about the loss of features so you can change your mind if needed.

Of course, if you are using very basic tools and features, using an earlier compatibility mode will be fine.

Know about the compatibility save, but beware of the possible loss too.