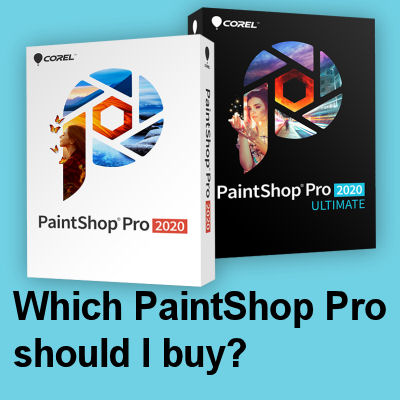 Which PaintShop Pro should I buy?

Whether you are a first-time customer purchasing your copy of PaintShop Pro, or a veteran getting your tenth version, there are some common questions that come up before the time of the purchase. Here are answers to the most frequent ones I have heard.

Is the "regular" option a lighter or incomplete version of the Ultimate?

Not at all. Both purchases will give you a complete version of PaintShop Pro. In fact, the program itself is identical, whichever "version" you purchase. The difference is in the bundling of the PaintShop Pro with additional programs. The PaintShop Pro itself is absolutely identical. You don't get more or less tools or commands with one or the other. You get the same thing.

Whether you previously bought the regular or the Ultimate version does not dictate what you should purchase this time around. If you bought PaintShop Pro Ultimate before, check which programs were bundled with it and compare with what is offered now. Maybe it has some of the same programs? Maybe it has something new that you want or something new that you don't need? As stated before, the Ultimate simply means it is bundled with additional goodies.

Another very common question (or even misunderstanding) is about whether to purchase the Full version or the upgrade. In order to answer this, we need to clarify one major detail: every version of PaintShop Pro that you will install will be totally independent of the others. They don't interfere with other versions. They don't overwrite the other versions. They can be installed side by side. They can even be open and running at the same time. Even if you purchase the Upgrade!

So what is the difference?

The Full version is basically what you want to get as your FIRST version of PaintShop Pro. Once you have a previous version, you are entitled to the upgrade price, even if it is a full version in itself.

Now that you know all that, it is time to make your purchase of the latest version of PaintShop Pro.