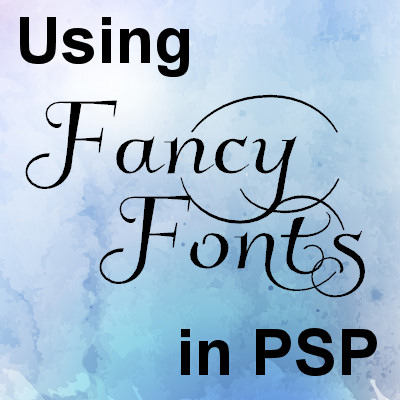 Are you the kind of person who loves to collect fonts whenever something nice is available, just in case you might want to use it later? If so, you might have noticed that all fonts are not the same format. In fact, they come in two main types: True Type fonts (.ttf) and Open Type fonts (.otf). Truetype fonts are older and most common. They are probably the type of the majority of the fonts you have collected so far. However, we occasionally encounter a font that has intricate ligatures and we want to use that font. The problem is that those special characters are only accessible by some more expensive programs, but Paintshop Pro can't. What to do?

As mentioned before, true type fonts are the older type of fonts. They are basic in their structure even though they can have intricate and elaborate glyphs (or characters). Open type fonts have the same characteristics but can also include some extra glyphs for the same characters, which can be used instead of the standard glyph. Although PaintShop Pro can use both types of fonts, it cannot access those extra glyphs that you might want to use. So, if you do want to use them, you have to use some workaround.

Did you know that you could access all those fancy and "hidden" glyphs with a little twist? Let's give it a try. For this tutorial, I'll be using the font called Kleymissky. It is a free font so you can go ahead and download it.

Although it is not recommended to install all the fonts you like, you will need to install this one. Just be selective on which font you will be installing so you don't overload your system.

Once you unzip the file that the font comes in, double-click on the font file and it will bring up this window. 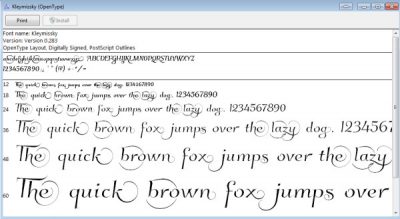 Click on the Install button on the top (in this capture, the font is already installed so that button is greyed out).

Open your PaintShop Pro and create a new blank document. In the font drop-down list, find the font you want to use. With a fairly large size, type the text you want. You will see that the characters are nice but pretty ordinary.

Let's replace some of these "ordinary" characters by some that are part of this font. Since you can't access them directly from PSP, go to the Character Map. You can access it by typing Character in the Start menu and you will see Character Map appear as one option. Click on it.

Find the font you want to use (in our example, the Kleymissky font), and at the bottom, for the Group by, select the Unicode Subrange. 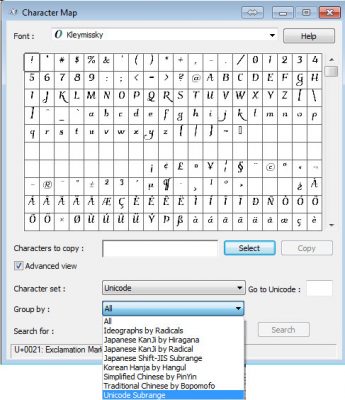 This will bring up another list. Scroll down to the very bottom and select Private Use Characters. That is where those fancy characters are "hidden". You can now see those extra characters. 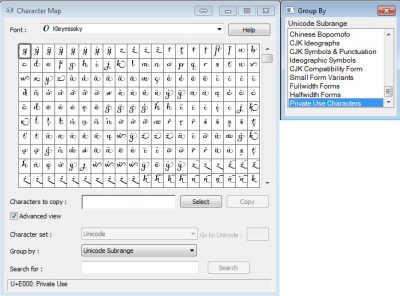 Wow! that is a real treasure you found there. Browsing through them, I can see that there is one glyph for the whole word "The". Let's highlight it, and click Select. If the font size is too small, change it to something as large as you can so you will see these much better. 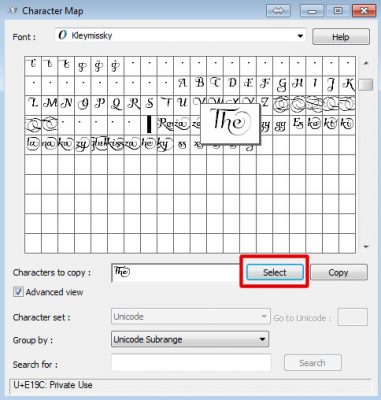 Highlight the character to copy, then click on the Copy button. For some reason, the Ctrl-C shortcut will not always work.

Let's add a special glyph for the uppercase "C"

This is a more interesting "C" than in the initial word, don't you think? Let's add the rest of the word "Campus". But I also noticed that there is a different version of the "s", which will add just a touch of elegance to the word.

Isn't that looking more interesting now? You can now copy and paste this new text onto your project (if you didn't already work directly on it). 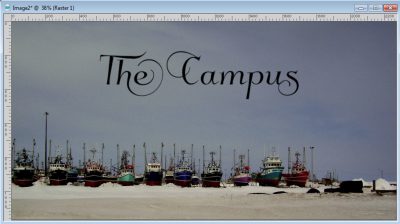 And this is how you can add some fancy fonts in your PaintShop Pro. Although this text IS editable, you will always have to use the Character Map if you want to edit the fancy parts, but if you need to edit a typo on other parts of the text, you should be ok. Also, since you already had to install the font, it will always be available in your PaintShop pro.

Considering that this text might be slightly harder to read, you might want to focus the use of those fancy fonts to titles or wordarts. But don't you think these fonts are great to use?

Here are some more of those interesting fonts you can use to create unique projects. Click on the preview to access the font. 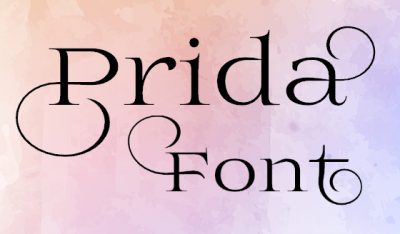 Do you know of other fancy fonts that are worth looking at? If so, add a link in the comments below.

A special thank you to Wendy, Michelle and Sue, who pointed me to a better way to use those fancy fonts than was originally described in this article. It has been edited to illustrate this better way.

26 thoughts on “Using Fancy Fonts in your PSP Projects”