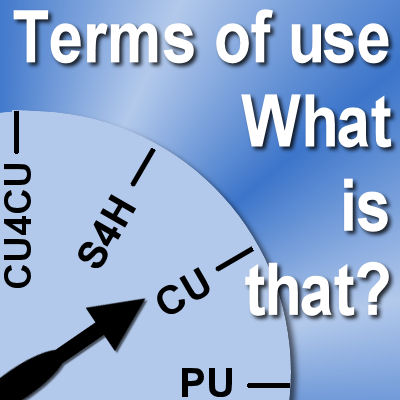 If you are doing digital scrapbooking or card making and download or purchase various supplies, you will often see some acronyms on the previews of those products. In addition, you will almost always find a document in the zip file with TOU in the filename. TOU means Terms of Use. But what the heck is that? What does that mean? And is it even important? Let's see that.

Each creator of digital products can decide what you can use their products for. That is their privilege, and if you want to use those supplies, you need to respect those rules. Although some use are obviously forbidden (like reselling as if they were yours), some are less defined and some are really in a grey area.

Designers usually will try to be as clear as they can whether you can do this or that with their supplies or not.

Some people have claimed to never read those TOU and even discard the files to make room on their computer. In some cases, it really won't matter, especially if you ONLY use the supplies to create your own scrapbook or cards for your personal use. Yet, it might be important to keep, for other reasons, even if just in case.

This is the most common type of use that you will find. It is, in a way, the most restrictive, but if you are only creating your own layouts, for your own albums, this is not a problem. Most kits you buy or download are labelled as PU. It simply means "use it for yourself only", or for gifts from yourself (it could be for your mother-in-law, or your bowling buddies).

At this point, supplies that are labelled as CU can be used by someone to create other projects that will be sold, or will bring in money. For example, if I purchase a set of ribbons, and then, I use those ribbons in a kit that I will be selling, that is a commercial use of those ribbons. That is the simplest way to illustrate this type of use, but in reality, it is not always that simple, depending on the wishes of the designer. Using a particular paper to create a preview can be considered CU. Using some elements to create a blog header can also be considered CU. Even using supplies during a video to illustrate a technique, can also be considered CU. So if you plan to use some supplies for anything that "seems" commercial or would bring in money, it has to have a CU label.

This is starting to be a little confusing, but mostly if you need this type of products. This is a situation where I might want to buy a particular element from a designer, and create another tool that I will sell as CU. For example, if I buy a set of flowers from Designer A, and I want to turn those flowers into picture tubes (with some modifications obviously), and then sell them, in my store, as CU. This becomes a CU for CU.

Some supplies will be labelled as S4H, others won't even though the description in their TOU document basically will spell it out. It means that you can use the particular supplies to create project for others that you are hired to do. For example, if you have a business of creating albums for people; they would give you the photos, the stories, and you put the pages together using supplies you have purchased. This would be considered Scrap for Hire. Normally, you will see designers state that if you are using their supplies in this manner, you can only give the "client" a flattened version of their page to print. The reasoning is simple: if you left the pages with all the layers, then the client could copy and paste all those papers and elements and use them on their own (if they have the time or knowledge) but since you are not supposed to distribute the supplies you bought, that is a way to prevent such "distribution".

There are many uses that are not clearly defined in those labels and since there is no "standard" in labeling supplies, you might need to read the TOU document in its entirety. But of course, that is only if you intend to use the products other than for yourself. If you only scrap for yourself (or gifts), every designer will allow that. After all, they don't want to cause problems for scrappers!

If you have other projects, or intend to use those digital supplies in ways that might not be obvious in the TOU, there is a simple way to clarify things: email the designer. The TOU will often include an email to reach the designer. Most of the time, those designers really appreciate it when you contact them to ask for a particular permission. They appreciate that you are not just using their products blindly, while ignoring their TOU.

Should I keep those TOU files?

In a nutshell, yes. Even if you are only using the supplies for personal use, in which case there is no risk of going against their TOU, maybe some day, you will want to contact this designer for something. They are usually pdf files and not really big at all, so you won't save that much space on your drive and you will not lose your sanity if you need to reach out to the designer at one point, later, in time. Better safe than sorry!