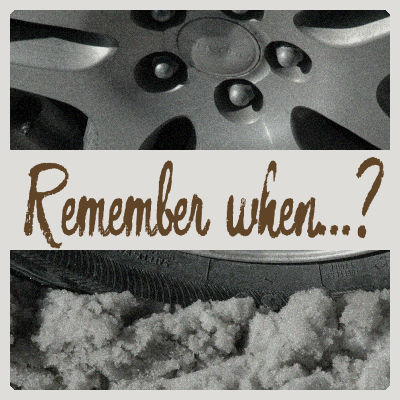 Remember when…? – Santa is stuck

This story is something I only partially saw, while another part was told to me. When my brother was 4 (and I was 12), my Dad played Santa for us but also for our cousin who lived fairly close to our house. Unfortunately, that day,  the roads were not the best.

As we were supposed to have Santa at our house, around 11pm (or maybe midnight), my Dad was asked to go to my uncle who lived about a mile away from our house. So, he got dressed at home, got in the car and drove off. However, the roads were still full of snow from a previous storm, and being away from main roads, the small side roads were not particularly cleared.

Just a hundred feet from his destination, Santa got stuck in the snow. The tires were spinning, and the amount of snow made it really hard to go forward or backward, but my Dad still tried to go back and forth without getting out of the car, not to wet his Santa suit.

The streets are fairly narrow in that area, and with a lot of snow accumulated in the previous days, it was even narrower. One car stuck in the center was actually blocking the way for anyone. There was not way to pass on the side. So, one care came out, behind my Dad and had to wait... and wait. After a few minutes, he got impatient, and beeped the horn. Of course, that didn't help my Dad.

As this driver grew more and more impatient, he decided to get out of the car and yell some chosen words to my Dad. As he came to his window, with an angry face, he realized he was talking to ... Santa. He burst into laughter and apparently said "Sorry Santa!". I am not sure if he managed to help my Dad get out of his precarious situation or if my Dad managed to do it on his own.

So yes, as you can expect, my Dad was slightly late to his destination, and as he also stayed a little longer than expected, he was late coming back to our house. That is the part I remember, since I was waiting in the window for him, with my young brother.

How often did you see someone's attitude instantaneously change at the sight of Santa? Or did you ever see Santa in a precarious or unusual situation? Share that story with us in the comments below.