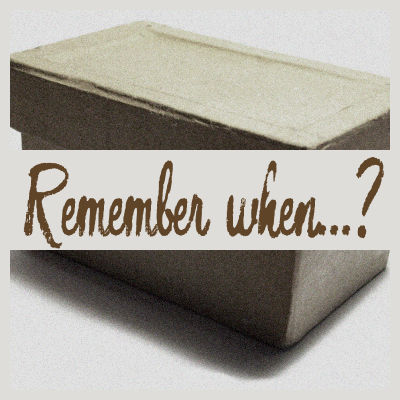 As I was preparing for the Christmas gift wrapping and exchanging, one statement my mom used to say, came back to my mind: "Never rely on the box". This statement was repeated at every Christmas simply because she would reuse the same boxes year after year.

Throughout the year, whenever we would get something in a sturdy box, she would save that box in our locker. We had big boxes, small boxes, long boxes, etc. Although presents might often come in boxes, sometimes, it was not the case and we would be struggling to find a way to wrap it. That is where the collected boxes came in handy.

One Christmas, I had made a comforter for my brother, and of course, I needed a box. But a comforter is pretty big so did we have a big enough box? Of course we did. We had that ONE big box, for several years, and it was the perfect size.

Yes, the big box that was used over and over, was a TV box. The first time it was used to wrap a Christmas present, the recipient thought they were getting a new TV, but it was not the case. I think that is when my mom started that phrase: "Don't rely on the box!", and boy was she right!

This phrase has been used and reused by her over the years, but also by me now, with my own family. Just this Christmas, my son got a box of Vachon cakes, but it had a book in it. My husband got a box from Royal Dulton, with a can of cashews and a box of Macaroni & Cheese included needed markers.

How about you? Did you ever get presents wrapped in a box that fooled you? Or did you ever wrap presents in a very odd or clever way to disguise the content? Share in the comments below. Who knows? We might want to copy your idea for next year.

After two years of weekly stories, this series is now coming to an end. I hope you enjoyed those stories and that they acted as prompts for your own memories, stories and adventures of the past. I hope you took the time not only to remember those, but to also document them, or write them down somewhere. Remember that those stories live in your memory and nobody else has lived through them the same way you did.