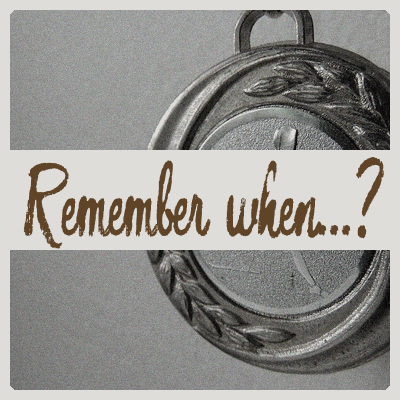 As I have mentioned before, I was not a particularly athletic child. I liked sports to some extend, but I never had that drive that some other kids had. Sports were fun, mostly if they were individual as I was not much of a team player. I preferred to compete against myself, at my own speed and level.

In my teens, I had done some track and field activity during one summer and the coach encouraged me to try out for the provincial competition at the local level. It was aimed at school kids and I am pretty sure there was an age limit too. I registered for the 100m sprint, the discus throw and the javelin throw (not that much related but those were some disciplines I was "good" at).

I always felt that I was not such a great runner, but if the coach said I could, I might as well try. We must have been about 20 runners in my category and at my first run, I came in second, allowing me to run in the final. Unfortunately, I finished 7th out of 8 in the final. Not bad, but no medal there!

For some odd reasons, although the coach had me register for this discipline, it is one I was always scared of. I guess I have too much imagination and I always imagine that I will scratch my nose (or worse) with the end of the javelin as I throw it, even though its length makes it impossible to happen. As I was looking at the other participants, someone pointed another girl and told me that she was holding the national record in that age category. Wow! What are my chances? She would throw over 100m. How can we compete? At my turn, I threw something like 54m. Although I was against someone very much more skilled than me, I still held the second best throw of the competition, giving me a second place!

I am not sure how good my technique was for the discus throw but somehow, that is one discipline I really liked. I kind of felt "in control" with the discus, unlike for the javelin that always seemed to scare me. In this discipline, everyone was kind of at the same level and nobody was a national champion, so it was fair game. My best throw was 21.45m (amazing that I still remember those after so many years). That gave me a third place!

This event was the very first one where I could earn real medals. The kind of medals you get around your neck. Not just a red ribbon saying "1st place". I was so excited at the idea of stepping on a podium. I had NEVER had that chance before. Either I got a ribbon (in 6th grade for the soccer tournament) or I would be the eternal 4th. So I stayed for the whole day, even after my disciplines were done, so I could step on that podium. I kept looking around, and could not see the podium. But, I assumed they would only bring it out when the time came.

Near the end of the event, I asked around, to know how long I would still have to wait. That is when I was told something shocking: there was no podium. Oh no! No podium? Oh well, at least I would still have an official put those medals around my neck, right? Wrong again! I was totally shocked. In fact, I would get my medals... my mail! I am sure I still have those two medals, somewhere stored away. Those are the ONLY medals I ever won, but I never had the satisfaction to step on a podium to receive them!

How about you? Were you an athletic child? Did you ever participate in competitions of any kind? Do you have some fun or funny stories about those events? Share them in the comments below.