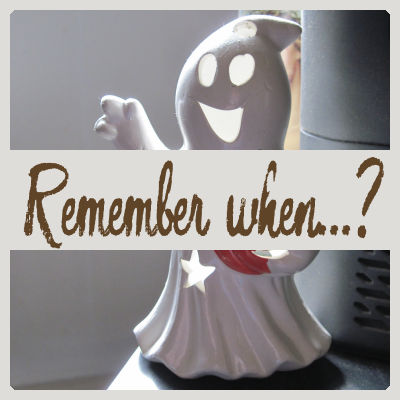 Halloween has always been a fun time, with enjoyment in the trick or treating part, and the costumes. Going out at night, in the dark, was also a treat in itself, however, it was more fun when Halloween was on the weekend, because we had more hours to go around and gather goodies.

Halloween is on a week day

One year, a babysitter came to take care of me. I can't remember how old I was. That year, October 31st was either on the Monday or the Tuesday, and this was Saturday.

The sitter told me something I had never heard of before: that year, in town, they were allowing children to go around trick or treating on Saturday, so they would have more time, and more daylight too. I was really happy but... I didn't have my costume ready.

Since my parents were not home, we were quite limited in what we could use as supplies to create a costume. We ended up using green garbage bags that were decorated. I have no idea what it was supposed to look like, but we glued various things on the bag, which could then fit over my coat.

As soon as the costume was done, we proceeded to go trick or treating around the neighbourhood. I was ringing the doorbell and received with puzzled looks. Halloween is not until a few days! So I explained that we were allowed to gather treats that day like other kids, so we could take advantage of more daylight. Some neighbours had already stocked up in candies, but others didn't.

After about half a dozen neighbours I met, always being told they never heard of that new "permission" to go around earlier, I went back to the sitter telling her that nobody else knew about it in this neighbourhood, and I was likely not going to be collecting much treats that day.

When my mom came back from wherever she was and saw our "craft", I explained to why we had to rush to make my Halloween costume that very day. That is when she told me there was no such thing as an early Halloween day for trick or treating. I have no idea where the sitter got that idea, but I surely felt embarrassed for having fallen for it.

1 thought on “Remember when…? – Early Halloween”