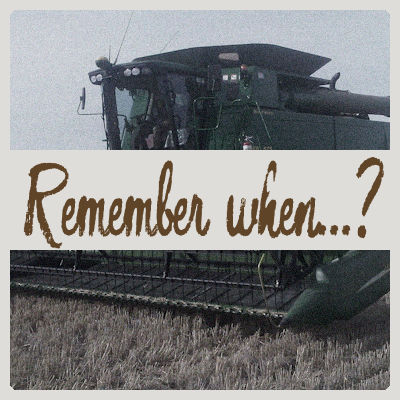 As you might remember, when I was young, my great-grand-mother lived on a farm where they had animals and large fields. Their main crop was potatoes. They had three huge fields, although I only remember the one that was right in front of their house, across the street.

Since they lived 2 hours away, we were not visiting that often, and when we did, it was mostly around holidays, or long weekends. We would often go in August, when corn was ready and we had huge corn boil and we would get back home with bags of corn. I loved it as I love corn on the cob!

Occasionally, we would end up going a bit later. If the time for the corn boil was over, then it was the potato time. Since I never lived on a farm myself, it was always an adventure to see the big machinery that was used for harvest. When I was a bit older (possibly a teen), I would be invited to help with the harvest. That was a treat!

As it turned out, the big machine would pick up all the potatoes, put them on a conveyor belt, and people standing on each side had to sort them among other debris that the machine would pick. I might have helped there only a couple of times, but it was really special.

There are a few reasons I can think why the kids didn't go help that often on that machine. First, since we could only visit on weekends, we had a shorter window of time to be available, and of course, if the weather was not good, they were not harvesting. Also, since they had three huge fields, I suspect they didn't want to bring kids to a field that was too far, since the kids would not usually stay that long and they would not be able to get back to the house, which was easy when they were harvesting right across the street.

I don't know if potato harvesting is still done with the same type of machinery now, using people to sort or if it has become even more automated and efficient.