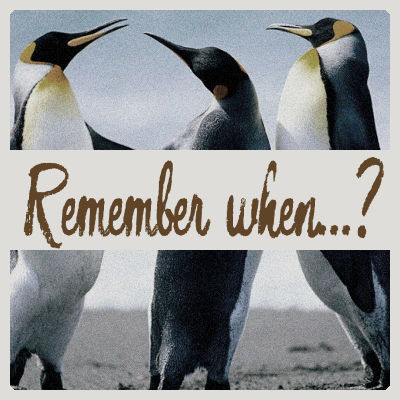 In class, I was often one who would ask questions, think of something else, and bring other students to sigh in despair. I was the curious one, and if I didn't understand, I would never settle to pretend I did. I would keep asking and asking and asking again. In a way, I guess it helped me learn, but it also got me a few odd looks!

When I was in grade 12, in our biology class, the teacher was talking about the different species and the way they were categorized and mostly how they were defined. For example, it was a mammal if the baby was born directly from the mother, with an umbilical cord, which explained why whales are mammals and not fish (you knew that, didn't you?).

Following that lesson on mammals, the teacher also defined birds as animals that have feathers, whether they can fly or not. That is when he said that was the explanation why penguins didn't fit in the bird category: they didn't have feathers. What? I raised my hand and said that as they have wings, they must have feathers too, but his response was that penguins had fur that was oily to protect them from the cold water, so they were not birds. Really??

I don't think so

I really didn't believe the teacher on that point but I had nothing to prove him wrong. We didn't have internet back then, and I just didn't want to go to the library to find a proof. I wanted something foolproof to ascertain my point. How could I do that?

In my mind, I was wondering if there was anyone specializing in penguins who could help me. Well, there was a big aquarium in Montreal and I took the phone and called, asking if they had penguins there. The receptionist said they did. So there was my answer.

Can I get some?

A few days later, I went to the aquarium and asked to see the penguin area. I chatted with a gentleman who was taking care of the penguins. Of course, he confirmed that penguins WERE birds, and they DID have feathers. In fact, he showed me that there were many of them floating in the water in their area. I am not shy, so I asked if I could get some, and he just went in, picked me some penguin feathers and I was very happy.

Do penguins have feathers?

On Monday, at the biology class, I raised my hand, and asked the teacher whether penguins had feathers or fur. His response was the same as the previous week: penguins have fur since they are not birds. That is when I got up, took a little package and opened it in front of him saying: "Penguins are birds and they have feathers. Here are some penguin feathers that I picked up from the penguin exhibition at the aquarium."

I know it was not particularly nice to stump the teacher like that in front of the class and I often thought that maybe I should have been more ... discrete, but I was so proud of myself to know something the teacher didn't know! I can't remember what he said, because I think he was just speechless, either from being proven wrong or from feeling "dumb" in front of a whole class. Who knows? I wonder if he remembered that ... penguins are birds!

Did you ever argue with a teacher when you were young? Did you ever find errors in a class, a book or a test? How did it go? Share your story in the comments below.

2 thoughts on “Remember when…? – Penguins”