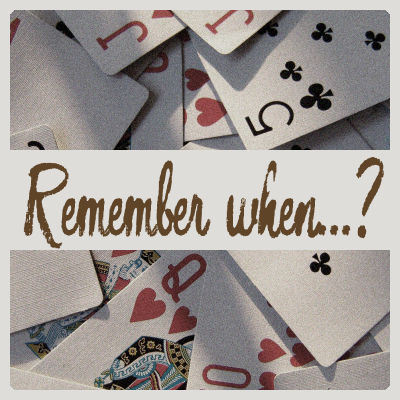 Although i have not been much of a card player, my parents and uncles and aunts seemed to love that. Since i was raised with only one little brother (8 years younger than me), i guess we never had enough people to play cards at home. But, my aunts and uncles were more than just card players: they loved to have FUN.

In the summer, my grand-parents had a cottage and we would often go there. Although it was hot in the city, at the cottage it was usually cooler but sometimes the adults liked to play with the kids, in the water.

I remember that we had one of those poles that had some kind of a tip that would spray water, a bit like a shower. As kids, we played with that since we didn't have a pool back then.

One day, one of the adult decided to have that "fountain" installed on the center of the round patio table. After all, there was a hole there to hold an umbrella, so that should work, right?

The next thing i remember was the grownups playing cards on that table, with the water fountain running. Basically, they were playing cards "under the water". Good thing they had plastic cards and no paper base ones.

One comment i remember hearing is that, although it was fun, refreshing and totally unusual to play under water, they noticed that the cards were not sliding as easily as they would have expected. I guess those cards were never meant to be used under water!

Did you ever do or witness an odd way of playing cards? Or any other game? Share your story in the comments below so we can smile too.