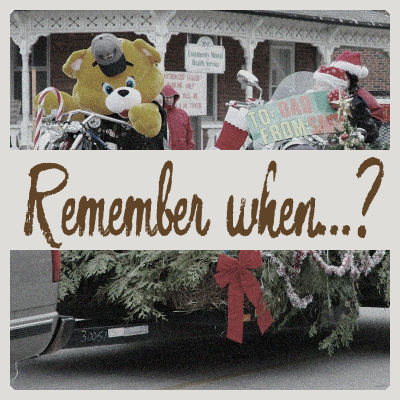 When I was in Secondary 2 (equivalent of grade 8), I went to a new school and that school had a band. I had never participated in a band before. Since several students had been there for a few years already, I was offered a "position" in the flag bearer line up instead of in the musical part. At least, that was not too hard, right?

Although we practiced from the beginning of the school year, i was not aware of what we would do with those routines. So, in January or so, i learned that we were going to participate in Quebec Carnival parade. To me, that was a BIG deal! We used to watch that parade on tv when i was younger!

Whenever we were practicing, we had our regular uniform but it was something more suited for summer, and with freezing temperature of winter, i was not sure it would work, but we were told that we were going to have some winter uniforms that would be thicker, longer and warmer. That was good news!

Where are the costumes?

Just days before the parade, we were told that the hangar where our uniforms were stored, had its roof collapse, and the uniforms were ruined, and unusable. The organizers scrambled to see what we would wear, or if we could even have anything to wear. It turned out that they asked other bands, if they had spare costumes and as you can imagine, nobody had 30 some extra uniforms!

Instead of cancelling our participation, we were offered a few extras from different bands and groups, so we ended up wearing all mismatched uniforms. I was wearing a lieutenant uniform, while the one in front of me was a clown, and another was was a lion. Can you imagine how ridiculous this would have looked to the crowd?

Since it was my very first parade, i had no idea how long we had to walk. Many of the other participants were also in this parade for the first time. I don't know if you ever participated in such an event, but although on TV it looks like everyone is walking at a regular pace, it was not always the case. We would stay in one place for a while, walk for a bit and so on. We would often ask the volunteers how long we still had to go (remember, it was like -20 outside, and our mittens would freeze on the flagpoles!). They would always answer "At the next light". I don't know how many "next light" we had to go through but i was told it was something like 3 km. In itself, it is not that long, but at the speed we were advancing, and with the cold, it seemed like an eternity!

All in all, it was still an experience, which was repeated the next week as the Carnival used to have two similar parades on two different routes. That was the last time i was part of a band or a parade. At least something to tell my kids about!

How about you? Did you ever participate in a special event or experienced something out of the ordinary for a regular event you were part of? Share your stories below.