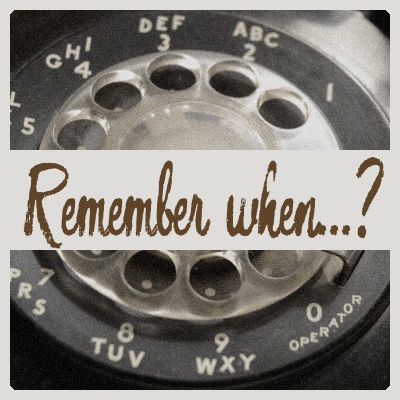 With the common use of call display on many modern phones, we have the option of answering or not answering since can often know who is the caller. Back in the days, this was not as easy and either one would answer a call from someone they really didn't want to answer, or they would ignore a call from someone they really wanted to talk to. But my parents had a trick for that!

I am not sure what triggered the need to know who was calling, back in those days. Maybe my parents, at least at one point, didn't want to answer all the calls. My Dad was a salesman so maybe it had to do with not being bothered by customers during his off days? Or for my Mom not to have to answer to them when they called home instead of at his work? I don't know but I know there were selective, at least at certain times.

The "code" that everyone knew of, in the family, was to ring twice, hang up and call back. Close relatives like my grandparents and uncles and aunts knew the code. I remember the phone ringing and my Mom counting the rings. One ring. Two rings. Silence. Ring again, and she would answer. If there was a third ring in a row, she would ignore it, sometimes.

As i reached my teen years, my parents divorced and for a while my Mom didn't want anything to do with people calling. Although the "code" had not been used for years, she reverted to answering only to those who knew the code. Did my Dad remember it or not? I don't know. Maybe he used it, maybe he had forgotten about it. I knew that i often would not get an answer to the phone if i called home. If that were the case, i would retry using the code. If my Mom was home, she would then answer.

This kind of code certainly would not work anymore with all those cell phones around having uncommon ringtones. One could not identify "two rings" anymore!

How about you? Did you ever have a reason, in the past, to only answer the phone for some people? If so, did you ever get a trick to work it out? Share your story in the comments below.