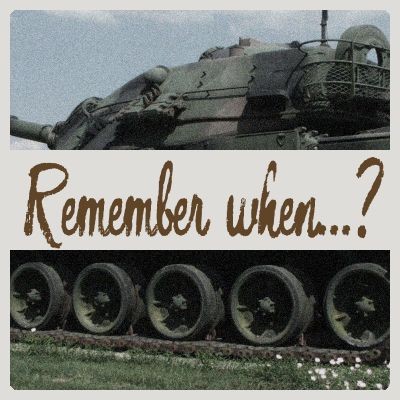 In a country that has not gone through war, most people have never encountered some particular types of vehicles. Living in Canada, we have mostly seen those on the news only, but when i was a kid, i did encounter one of those unexpected monsters.

In 1970, there was a political situation that totally escaped me, since i was only 9 years old. As an adult, i was never very interested in politics, so imagine how i was as a kid! It happened in the province of Quebec, and many of the events were around Montreal, where i lived.

I remember that one morning, in grade 5, the teacher asked us to get up and say a prayer for the safe return of someone who had been kidnapped. It was the first i heard of this person, and it was also the first time the teacher ever asked us to say a prayer, as it was not a common practice in that school. She was explaining that there was a deadline that could mean this person would be killed. Now, from the events i know now, two men had been kidnapped: one was killed and found in the trunk of a car, the other was released weeks later. I have no clue which one she was referring to at the time.

A tank in the street

I lived on the same street as the school i was going. Normally, i would just walk from the house to the school, without "visiting" any other street, but i had some friends living on a street that was parallel to mine so, occasionally, i would follow that street. During the period of that political turmoil, one morning, i saw a tank on that street. A real tank. Something i would only have seen as an organized visit somewhere, or a museum. But that was a real one, on the real street, close to home.

The only explanation i had for that tank, that was peacefully parked in front of a house is that the resident of that house might have been at risk of being kidnapped or attacked. To me, it only meant that this was a rich person! I didn't understand anything about politics, can you guess?

I did a little research on the events that took place at that time and if you feel like reading about it, you can check here: October Crisis.

Did you ever experience something, as a child, that you had really no understanding of, but still remember seeing or hearing about? Share those unusual events with us in the comments below.