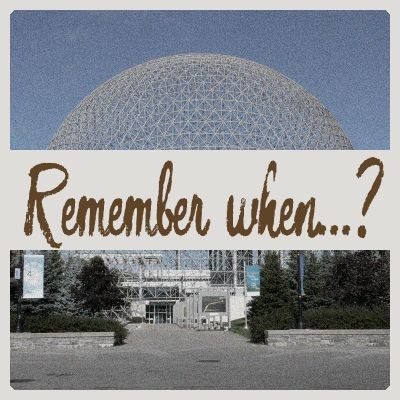 Let's go for a visit

When Expo 67 opened, I was 6 years old. My Mom was a stay at home mom at the time, so she had a great opportunity to go, every day if she wanted. But for me, being so young, I would not have enjoyed that too often, even though I still liked some areas.

One of the strongest memories I have of that time, is the long line ups to visit various pavilions. I would wait, with my Mom, for hours. If my Aunt was there, they would take turns keeping the spot on the line, while the other would go sit in the shade, or bring me to eat or drink something, or just for a bathroom break.

One place we visited was inspired by Alexander Grahm Bell, and there were various telephones associated with different Disney characters. I wanted to talk to Mickey Mouse, but his line was busy, so I ended up talking to Snow White. That was not the same. I was disappointed.

One other attraction I remember, was probably a precursor of 3D movies. It was a large room with screens all around the room (I think it was round, but I am not 100% certain), and people were standing in the center. There were some guards or handrails throughout and that is where my parents had me sitting (or maybe standing) since i would not have seen anything if I had stayed on the floor with all those grownups standing up. There was a movie playing on all screens as if we were in a racing car. It was cool to watch the scene, wherever you looked, in the front, the back or the side. The funniest part was when the car stopped, and most people leaned or even fell forward.

Another attraction was inside a pavilion. There were several stories of balconies around the inside of the building. On one side, there was a huge screen, as high as at least 4 stories high, and on the ground floor, in the middle, was another screen, flat down. And then, there was a movie, showing simultaneously on the tall vertical screen and the wide flat one. The movie was about someone climbing on the edge of something. I am not sure if it was the side of a building or a cliff. I just remember the vertigo effect those two screens were giving me!

Lights to the music

I think it was the Great-Britain pavilion (but I am not sure), and in a very large room, there were many many strings of lights attached all around, between the walls, the stairs, the ceiling, the beams, everywhere. There was music playing and the lights were blinking with the sound. I think each color of light was linked to a particular note, and in the dimmed environment, it was magical

I read somewhere that a lot of things used in the making of Expo 67 were quite new. Maybe I was a witness of the first steps of new technologies.

Almost 50 years later, I might actually still have the passport I got back then. That was the document you would present at the entrance of each pavilion to get a stamp for the particular country it was from, or the attraction.  I heard that each pavilion, being built and operated for each country were actually considered part of that country, meaning that stepping foot inside the Australia pavilion meant I actually step foot in Australia. Is that accurate? If so, I really went around the world, in 80 days (ok it was more like 180 days)!

Did you ever visit a super special attraction or event and have memories of it? Anything out of the ordinary happen? Share your memories in the comments below.