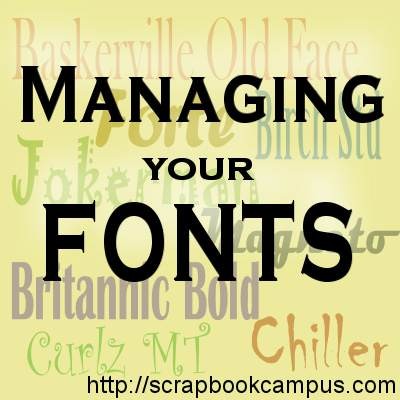 Are you collecting fonts at every opportunity you have? Are you always downloading new fonts you find left and right? How do you manage to have hundreds or even thousands of fonts? Are you losing the battle? Here are a few tips that might help you.

Don't install them all

If you were to add only a handful of useful fonts, you could have them installed in your Windows folder, but if you have hundreds or thousands of fonts, you will run into a serious issue: convenience.

I have found conflicting opinions on whether adding hundreds of fonts to your windows system will slow it down. Some say yes, some say no. Some say it was only for older operating systems, some say it was never an issue. But either way, you don't NEED to install them, even if you collect them.

If you want to install fonts, only choose the ones you really plan on using often or regularly. If you are doing regular newsletters in Word and use the same font for some sections, go ahead and install that font but that would probably be just a handful anyways.

Use a font viewer

Font viewers are very useful because you can actually see what all those fonts look like instead of staring a hundreds of names only. There are several great font viewers, and some are free. Check out this article listing some useful free font viewers.

Are you looking for a bold font for your project? Or maybe a dingbat? Or a font with only uppercases? Or some script fonts? Searching by name will probably be useless to you. Once you have access to a font viewer, take some time to sort the fonts you have. You will be surprised to see that you probably have several fonts that are basically identical, yet they have different names. Delete those duplicates, or at least, move them out of the main folders.

Create a folder for script, dingbats, bold, formal, curly, themed, or any other category of fonts you can think of. Move the fonts you have in those folders so you will have fewer to browse through when you need one. This will be a tedious task for sure, especially if you have hundreds or thousands of fonts, but it will be worth it in the end. Out of 1000 fonts, maybe only 300 will be useful for you while the rest might be duplicates and triplicates of other fonts and dingbats.

Some font viewers will allow you to install fonts only on a temporary basis. If you are planning on working on a particular project for the next week or so, install the fonts you will need, then, uninstall them.

With some font viewers, you will be able to use the fonts without even installing them. For example, with TheFontThing, i can use the fonts in my Paintshop Pro as long as those fonts are visible in the right pane of TFT. Nothing to install or uninstall. With PSP, you don't even need to restart the program to see those fonts in the drop down list.

Check out the Resource page of the Campus for various font sites. Keep collecting your fonts. It is great when you find a new font or something original. Just remember to manage them before they manage you!