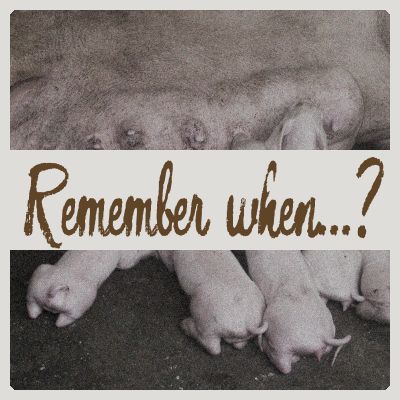 When i was young, we used to spend Christmas at my grandma, but New Year's Day at my great-grandma. She owned a farm and that meant it was a large playground for active kids.

Animals on the farm

We were always impresses by seeing the calves, the chicks and piglets. Since they were breeding the animals, they had babies just about all the time on the farm.

My great-uncle knew that the whole family would gather on New Year's Day, and as a tradition (sort of), he would planned to piglets to be born on that day. It was the case every year. I don't know how he could be so accurate, but it worked

My cousins and I would spend a lot of time beside the pig pen, waiting for the big event. My uncle explained that to know how many piglets would be born, we had to check in what direction the mother would move her tail: at the halfway mark, it would change direction. Was that true or not, I never found out, but it surely was a good way to keep us quiet and watching attentively.

One year, we were waiting, and waiting, and waiting. Although we could see the mother was in labour, there was no piglet in view. We probably waited for hours, or at least what seemed like hours for us. We were quite disappointed. After waiting all afternoon, our parents called us all for dinner. After dinner, we went back to the farm to keep waiting. But it was too late. All the piglets had been born during the dinner time. We missed the show for another year!

How about you? Do you have fun stories about the farm? Whether you lived on a farm or you visited a farm? Share your stories in the comments below.