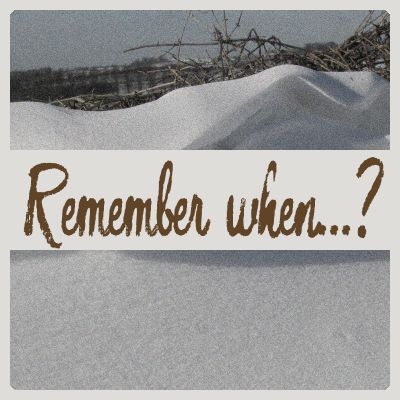 There is a commercial on TV that states "Not everything kids do, makes sense", and i have to agree with that statement. When i was a kid, just like all the kids in the neighbourhood, we have done things that were not... making much sense. The way we entertained ourselves was among those things that could make you cringe.

Jumping in the snow

Living in Montreal, we regularly had a lot of snow in the winter. Several feet was not unheard of. Jumping in the fluffy snow was common and fun.

Jumping from the balcony

In order to get some adrenaline going, we would go to the first floor balcony, which was probably something like 5 or 6 feet off the ground, giving us a way to jump directly in the snow, especially where the snow had drifted.

Considering the height of the snow drifts, we decided to be a little bolder and jump from the second floor balcony. Although we suspected the adults would not approve of this little stunt, we did it anyway, and had great fun falling into that fluffy snow.

A few days later, i was out playing, and i thought it would be fun to jump again, from the second balcony. So i proceeded to the neighbours' balcony (they had more snow than our house). I was alone. I didn't have my buddies. But what is the problem? We all jumped at the same place a few days before, so what is to be scared of? Well, there is something that a 8 or 9 year old does not necessarily know about: snow changes consistency based on the weather.

So, although it was a little frightening, i decided to jump. But this time, the landing was not as soft as it was the previous time. In fact, it was a hard landing. Why? Because the snow had had time to turn to a crusty snow drift and instead of digging inside the fluffy snow drift, i landed on a hard snow packed surface. Since i didn't expected that much of a hard landing, i was not ready; my feet didn't go in the snow, but my knees suddenly went up to my chin. Ouch!

After that one hard landing, needless to say that i decided not to repeat the stunt. It was probably the very last time i ever jumped from a second floor balcony into the snow... any snow!

How about you? Did you ever do something as a kid that you now realize was not very smart? Share that little bit of craziness you had, as a kid as i am sure you have gone through something that "didn't really make sense".