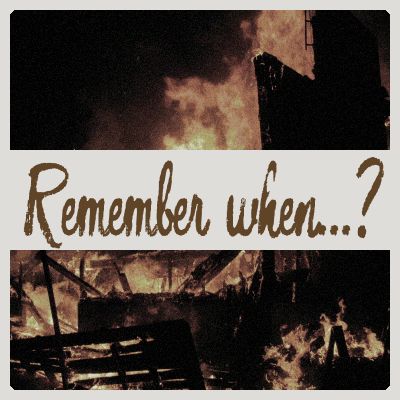 I did tell the story of when the electrical box caught fire at our apartment, but I saw a bigger fire when i was much younger. Luckily, it was not on our property.

Remember the story of the storm where we were afraid a big pine tree would fall on the house? We were often visiting there in the summer since that cottage belonged to my grand-parents.

I cannot specifically remember how old i was, but i would guess around 6 or 7. The house was fairly far from the street, at least for a kid my age.

The house across the street

Because of the fact that we were always busy playing with cousins, and that the houses were all quite far from each other, we never had to go play with the neighbours. In fact, i don't even remember any kids at any house that would have been around. The area was heavily wooded so we could not even see any neighbours, except for one house across the street.

Between the house and the street, was a fairly empty field, which allowed us to see that brick house across the street, even when only standing on the porch. That big brick house had also a barn beside, that was also easy to see.

One afternoon, I was told there was a fire across the street. We all stood on the porch, watching the barn burn in big flames. From what i was told, the house itself was not damaged but the barn was a total loss. The fire lasted what i feel was a long time. Long enough to last until sunset, which made the scene pretty spectacular for us. I don't remember firetrucks or firemen being there, probably because it was still a bit too far to get a good look and there were enough trees on their property to "hide" all that from our view.

I didn't know those neighbours. I am not sure my grandparents did either (but maybe they did?). In any case, i didn't hear of any death or injury from that fire. I still have the vivid image of a barn engulfed in flames, in the dark of the evening. That is all i remember, and it was the closest "big" fire i encountered.

How about you? Have you ever witnessed a house fire or a forest fire from a distance, but still with your own eyes? Dig through your memories. Any picture that come out? Share your story in the comments below.