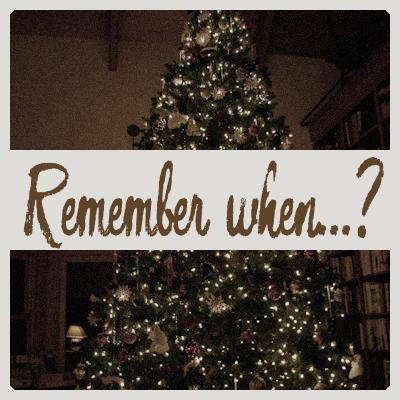 Many memories come to mind when one think of Christmas, whether they are happy, sad, weird or funny. One story that i still remember vividly happened on Christmas Eve, when i was about 6 or 7.

Back then, we had natural trees, with old fashion glass balls, and tinsels. My mom loved tinsels, and was very meticulously placing them one by one, making sure they weren't overlapping each other. It was a task that would take days. Nobody else was able to place them the way she did.

Once the tree was completely decorated, my mom sprayed some fake snow on the hardwood floor and drew a nice circle all around the base of the tree. It was magnificient.

Since we lived in a 2 bedroom apartment, we rarely had everyone over for Christmas Eve or Christmas Day but that year, my mom did invite my grandparents, and her brothers and sister. And the cousins too. At the time, we were only 5 cousins, but that still was going to be a lot of people for the size of the place.

At the time, we were also taking care of another little girl, just a year older than i was, while her parents were unavailable (or something like that). We were all ready, dressed up, and everyone was expected to arrive within the hour, so my mom had us sit in the livingroom to wait, and told us not to move.

We were just talking and being very quiet on the couch, as instructed. That is when i noticed that nice looking fake snow. But is that real or fake? Is it cold like snow? It was the first time we had that at home and i was curious. I quietly got off the couch and approached the tree. I knelt down to have a closer look at that snow. It didn't look like real snow. Is it cold? I touched the very edge of that perfect circle to realize that it was not cold. Boring discovery, so i turned around and went back to the couch.

Before i reached for the couch, i heard a crash behind me. The whole tree had fallen down, missing me by not much. My mom immediately came to check what was that noise and, with horror, saw her perfect tree on the floor. She pulled the tree back up but most of the glass balls were obviously broken and all those tinsels had become mangled. She didn't have time to fix anything. She lifted the tree and leaned it in the corner of the room, turning it a bit to hide some of the most disastrous areas.

Of course, i was blamed for touching the tree when i shouldn't have but i can swear that i didn't touch the tree. I was convinced that touching the fake snow pulled it down!

How about you? How did you decorate your tree? Anything particular even happened to your tree? Share those stories for the holidays in the comments below.