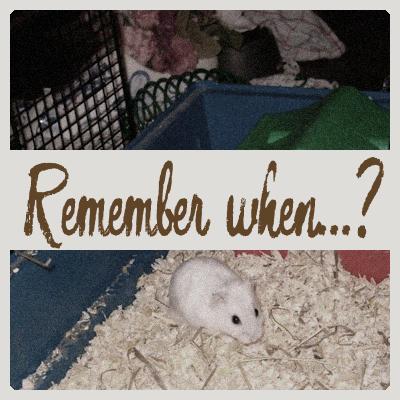 I always loved animals, and when i was a kid, i have thought of becoming a veterinarian, probably like many other kids. We lived in an apartment, and cats and dogs were not allowed. I tried several "tricks" to bring in a pet at home, but obviously, this never worked.

We had a goldfish

I would often mention how i would like to have a pet, but everyone knew that it was not allowed in our apartment. I would go to the pet shop, look at the puppies and the kittens. Once, for my birthday, i got a goldfish. I don't remember how long we had it, but it was not a very long time.

One day, i was shopping with grandma and as usual, we went to the pet store. I looked at the puppies and the kittens, but knew i could not have any. Then, grandma had an idea: how about white mice? Since they would not scratch or bark, i guess those would be allowed. So grandma got me 2 white mice, complete with a cage, food and all that came with it.

When we got home, i was so happy to show my mom what grandma had bought me. But Mom was less than thrilled! I am not sure she dared telling the landlord either!

It was understood that i was the one who had to take care of the mice, feed them, clean their cage, and so on. I was quite ok with it, and i think i did my chores (although, i am not 100% sure i remember that part correctly, since i was still young).

I would be happy to bring the mice to show them off to the neighbours (i guess the landlord must have been informed at one point or another). I would take the mice out of their cage and hand them to my friends. They say that animals will know if you are afraid, and sure enough, the only one friend who was afraid of mice got bitten.

I am not sure exactly how long the mice lived. I think it was at least a few months, but one after the other, they died. Of course, i was sad, but mom never allowed me to get more mice as pets!

How about you? Did you ever have a pet? Any unusual pet? Or did someone else get an unusual pet that you thought was strange? Share your story here.