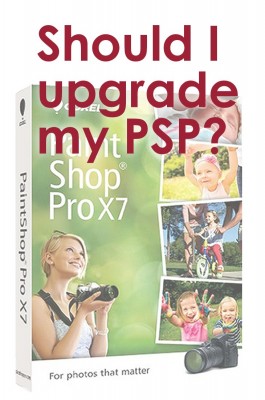 Should I upgrade my PaintShop Pro?

Corel has been releasing a new version of PaintShop Pro, more or less every year, around September. Each new version brings new features, some might be small improvement to existing tools or commands, others are real novel features.

I am so confortable with my current version

Although many people will wait to upgrade until they feel the need to use those new features, some still want to upgrade every year. But, if you have customized your current version of PaintShop Pro, changed the menus around, added shortcuts, and basically became really comfortable in using your program, will you lose everything if you upgrade?

Will it overwrite my current version?

Upgrading does not overwrite the current version you are having. This means that the new version will be installed completely separately, and will not affect your current version.

Can I have more than one version of PaintShop Pro?

Since upgrading means you will have a second PaintShop Pro, many users are concerned that they will interfere with each other. That is a myth. You can have two or more versions on your computer without any issue.

Can I run more than one version at the same time?

Not only you can have several versions of PaintShop Pro installed on your computer, but you can also have more than one open at the same time. If you have ever attended one of the monthly live presentations, you might have noticed that I keep at least 2 versions open at the same time: it allows me to show differences in tools or commands if needed.

I take a while to get used to a new version

Since you are not going to lose your current program or your customization, you will not be completely lost when using a newer version. If you find something too complex to do with the newest version, you can always revert to an older one, that might feel more comfortable for you.

I hear it has bugs

Well, you heard right. But that is nothing new. Every piece of new software will have bugs, and that is kind of part of the game. A program as complex as PaintShop Pro, has so many components that it is common that adding a new feature, fixing an old bug, improving a common tool can affect something else, unexpectedly. That is why a service pack is usually planned shortly after the official release.

Is it worth it to upgrade?

Whether it is worth for you to upgrade for you or not, is often a matter of personal preference. Some of the new features might be very useful for you, or maybe not. It depends on how you use your program, what type of projects you create with it. In any case, there is always a trial version of the newest PaintShop Pro, so you can download it, install it and play around with it for 30 days without paying. If you feel it is worth it, purchase it. If you feel you don’t need the newest tools and features, you will not have spent any money, and you can wait for the next version. And best of all, you didn’t lose your old version either.

5 thoughts on “Should I upgrade my PaintShop Pro?”