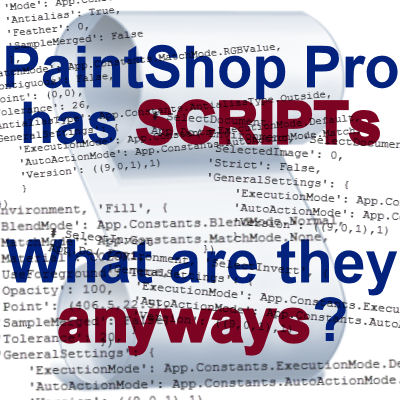 What are scripts in PaintShop Pro? – Part 2

Last week, we looked at what scripts were and what they could do. This week, we will dive in a little deeper into using scripts, coding them and choosing them if we don’t want to create them ourselves.

What is the difference between the Restricted scripts and the Trusted scripts?

As stated before, scripts are commands that will be executed for you. Some commands might have an effect on your computer or cannot be simply undone with a Ctrl-z. Such commands include saving files to your computer, closing a file or using some more advanced Python commands. To keep your computer safe, the only scripts allowed to perform such tasks have to be in the TRUSTED scripts folder. It is a way for the computer to know that you TRUST those scripts to not cause any damage to your computer. So, to be on the safe side of things, always save a script in the RESTRICTED scripts folder, unless specifically asked by the scripter. It is a good habit to take.

Is it complicated to use scripts?

Scripts will be downloaded just like any other digital product you might purchase in an online store. You should find a .pspscript file and that is the script file. Save it in the Scripts – Restricted folder (unless otherwise stated in the readme file). Then, to run it, you can either go with File > Script > Run and you browse to the script you want to run, or to make things even easier, display the script toolbar with View > Toolbar > Script, and from there, you will be able to find your script AND change the mode from Interactive to Silent. Also, make sure you read the README file and any instruction windows you can have. They are important because starting the script with the wrong type of image or too many images might cause issues and errors.

What if the script fails?

Nothing. Well, if the script fails, you will get an annoying sound and an error window that will appear. But that is all. A failed script will not harm your computer or your PSP. The worst-case scenario is that the script will be stuck in an infinite loop and you will have to close your PSP. But that is nothing to worry about.

What can I do if a script fails?

If your script fails, check the readme file to see if you might have forgotten one step in the process. If you are sure you did everything right, you can contact the author with information on what happened, with details on your setup (what PSP version you have), and a screenshot of before you run the script and after it fails. Also, when running a script, have the Script Output Palette (Shift-F3) open. It might include some instructions to follow but mostly, if the script fails, you will have a detailed error message. Copy the whole error message when you contact the scripter. He or she will know what to do with it.

Photoshop has scripts too!

Yes, Photoshop has scripts, and they are also a set of commands, but coded in Photoshop’s language so they cannot be read by PSP. The scripts made for PaintShop Pro will not work with Photoshop, simply because PSP and PS use a different language. It is like a recipe written in English cannot be followed by a Spanish cook. In the same way, actions written for Photoshop will not work in PaintShop and vice versa.

How do I tell if I have a “good” script?

Like explained above, anyone can record a script using the Record function. And if the script requires only the application of various effects to the whole image (like photo scripts), those should work for you. A “good” script will often go beyond that. Here are some points to consider.

Those are only some points that can differentiate between a good script and an average one. If the scripter has some free samples, check them out. Test them yourself. See what you can get out of them. If you are unsure, read the description carefully, and possibly look for product reviews. Still unsure, ask the scripter.

Where can I find good scripts?

The answer to this question might depend on the type of script you are looking for, however, here are some “traditional” sites where you can find some scripts.

Let’s hope that you will now feel more comfortable in using scripts for your next projects. Do you have additional questions, about scripts or about PSP? Just email me or post a comment. I might just address your point in a future post.