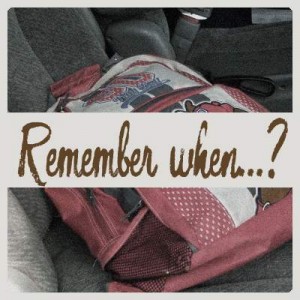 When i was young, i actually loved school. I might not have been the best in class but i enjoyed going to school.

Every day, we had homework to do, and i would obviously bring all my books and notebooks home to do it. However, occasionally, on Fridays, we were “homework free”. That was a treat, as it was not that often.

I was a lazy kid

In a way, i was kind of a lazy kid. Back then, we didn’t have backpacks like kids have now: we had “briefcases” to carry our books and school stuff. They were a bit bulky and required being held at least with one hand. How can i play on my way home while holding that school bag?

No locker back then?

We didn’t have lockers to keep our stuff in. The most i remember was a hook to put our coat, so i could not leave my school bag in any space that was mine.

I might have been lazy, and probably thought i was clever too. The solution i found was super simple: i would make sure i was among the last students out of the school (probably going for a bathroom break on my way out), and i would hide my school bag behind the main door. My reasoning was that, once the doors were open, nobody would see it, and when the doors were closed, nobody was left in the school. Now, i wonder if there were janitors or not; i never thought of them back then.

I want to play

I was then able to walk home, without anything in my hands to prevent me from playing along the way.

On Monday morning, i would simply grab my school bag from behind the door as i walked in. As far as i know, nobody ever noticed, or at least nobody ever mentioned anything.

Was that clever or stupid? Who knows?

How about you? Did you ever find clever (or not-so-clever) ways to get out of homework or out of bring stuff from school? Or anything else you did, in school that you thought you were really clever about? Share those old stories. They will surely bring some smiles.

2 thoughts on “Remember when…? – Schoolbag”