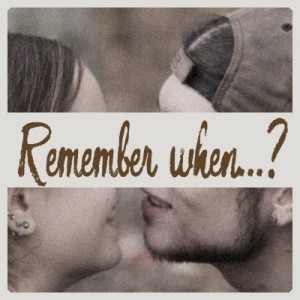 Remember when…? – A kiss

Maybe i should have told this story around Valentine’s Day, but i had… forgotten!

In 1984, i happened to meet Bob, at a goodbye dinner for the summer students at work. Bob came along with his brother Don, who was my colleague’s boyfriend at the time. Bob was a fun guy, and he was single, like i was.

Bob and Don both worked for their father in his sign shop. They had moved in the area only a few months before.

Being in a small community, it is common for coworkers to mingle after work. I had a few outings with Bob and one day, his dad said his partner at work had a get together and all the staff was invited (the staff was about 5 or 6 employees, including Bob and Don). Since Bob planned to go for a bit, he invited me to go along. I am not a particularly social person and gatherings like that were not my cup of tea. I guess he was a bit like that too, so he told me there was going to be a pool, so i could bring my swimsuit, so i did.

It was the first time i was meeting some of those people and as a polite guest, i shook hands with everyone i was introduced to, then i sat and listened. I was kind of bored and they had loud music which is something i really don’t care for. Then someone suggested we could go for a swim. That should take care of the boredom, and would be quieter right? So i went ahead, changed in my swimsuit and got into the pool. Most people also joined in for a while. It was getting dark and eventually they went back inside. Everyone except Bob. I thought it was a fun time and place to chitchat. It was quiet and it was so much easier to talk than inside with the music.

I remember enjoying that quiet time. Bob was telling me about being raised in Toronto, and i was telling about me growing up in Montreal. I was just floating in the pool, quietly, with my eyes closed to not get water in. That is when, this shy guy decided to kiss me. But remember, i had my eyes closed and i definitely didn’t see him coming! What happened? He almost drowned me by surprise! By reflex i sank in the water!!!

I am not upset

I was not mad at him although he apparently felt very bad for this and he apologized. But hey, it was a sincere kiss. The first one. It probably sparked something because he is still with me and became my husband a few years later!

Do you have stories about a first kiss? or any kiss in particular? Did it happen to you or did you see something unusual or exciting? Share your story in the comment below. I am anxious to read them!