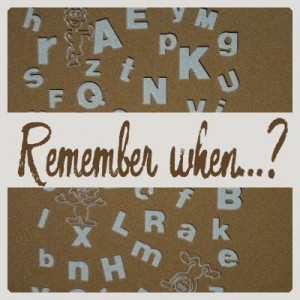 Remember when…? – That name

Everyone has a name, whether we like it or not. And most of us share that name with other people, some famous, some unknown. Names appear in waves, becoming popular for a few years, then be unheard of, until someone revives it and we think “that is an old name”, but then, we get used to it all over again.

As some of you know, Cassel is only my online name, but my actual name is Carole. It was popular in the 60’s. Since 30 years, i have been working as a speech language pathologist with children, and believe it or not, i have not seen a single child called Carole among the children i worked with. I have seen Caroline once. However, when i was a kid, it was a bit different.

Moving to a new school

Last week, i told you about my grade 6 year at a new school. Unfortunately, although i loved that school, i was not able to complete my year there. In Montreal, in those years, apartment leases were from May 1st to April 30th. Very inconvenient for school kids who always had to switch school two months before the end of the year. And yes, that was my situation too.

I remember my first day at this new school. I was following the principal, and she walked toward those “trailers”. The school population had grown tremendously in that area and they had 3 trailers to host 3 extra classes of grade 6. Yes, they had eight classes for 6 graders! so i was assigned class 6H. So the principal knocked at the door, and one student opened. The teacher came to meet us at the door. The principal then introduced me to my new teacher, and when she said my name, i clearly remember the students closest to the door whisper “Another Carole!”. Yes, i was the third Carole in the class! I guess it was unusual. When i was younger i remember another Carole often being in my class but we were only 2.

The following year, i had to change school again, as the elementary school was only until grade 6 and then started Secondary. That school had only Secondary 1 and 2. I am not sure why. And there was another high school within walking distance that had Secondary 1 to 5 there. In any case, although it was a mixed school, for one class, it was only girls. I have no idea why. Nevertheless, although we were 3 Carole in grade 6, this time, it was worse. Can you guess? in a class of about 30 (i don’t remember the exact number of that particular class), we were seven students named Carole. Did i say it was a popular name in that year!?

And the winner is…

One funny moment i remember about this name is that one day, there was a random draw in that class for something (again, no idea what it was), but the teacher slowly read the winner’s name… Carole… and we were 7 sitting on the edge of our chair waiting for the rest. Well, i didn’t win. That is all i remember!

How about you? Do you have any story related to your name when you were a child? Someone else had the same name? Someone you liked or disliked? anyone mispronouncing your name consistently? Tell us about it in the comments below.