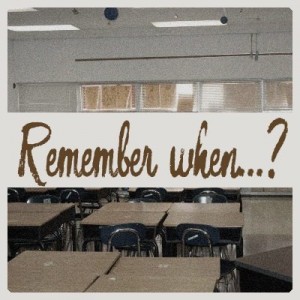 Remember when…? – Listening in school

School is a big part of most people as we probably spent a few years there. For some, school was fun, for others, not so much. But either way, there are surely a few things you remember from school.

When i was in grade 4, there was a new school being built closer to us but for some geographical divisions, i was not transferred to that school. That annoyed me, but when i finished grade 5, i was granted my wish.

This school was a different kind of school, based on a new concept of the time: open classrooms.

That is a big classroom

Part of the principle in this new school was that there were not closed spaces (hence the term “open classrooms”). The school had 2 floors: the top one was for all the actual classrooms and the bottom floor was for the other classes, the gym, lockers, etc. On the bottom floors, the music class, art class and such did have closed areas but not on the top floor.

I was in grade 6, and that class was huge. In fact, it was a set of four classes in one area. There were about 120 desks in that class and they were grouped in four “sub-classes” that were only divided by a moveable blackboard, or a bookshelf. This also meant that there were 4 teachers teaching at the same time, in their own “sub-class”. So once done with one class, we would move our drawer to another class, and another desk for another course.

To add to the concept of open space, i can also clarify that the only thing that divided the different grades were huge brick walls, but no doors. This meant that if the grade 1 students were singing their alphabet, everyone would hear it. If the grade 4 recited their multiplication tables outloud, everyone would hear them. Luckily it didn’t happen too often, but it did, on occasion.

Not only there were four teachers possibly talking at the same time (although in a different corner), but they were also teaching different subjects. How distracting can that be? I am sure it must have been hard for many students, but for me, it was heaven!

One ability i always had was multitasking. And in such an environment, multitasking could become a real asset, if you could manage it. In fact, you probably know that in any classroom, a teacher will need to repeat the same thing more than once, to make sure that the students got the information correctly. This also means a “waste” of time when a student understood a concept the first time around. So, what to do during the rest of the course? Listen on the next course!

I am not sure how much the teachers expected the students to listen on the other classes, but i do remember them being often surprised at how “bright” and “knowledgeable” i was since i so often had the correct answer even to the tough questions! Well, it was my way to cheat, in a way. But, is that really cheating? I was just learning from multiple teachers at the same time, so that is fair, isn’t it?

Unfortunately, that school was only for grade 1 to 6, and it was going to be my first, and last year in that school. Even worse, i was not able to finish my school year there as we moved on May 1st. But don’t worry, when i went to my next school, something else happened. You’ll hear about it next week!

2 thoughts on “Remember when…? – Listening in school”