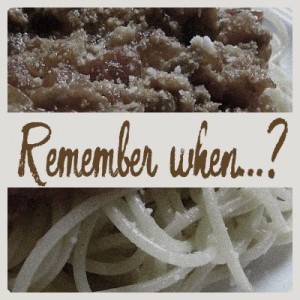 Humans are creatures of routines. Our whole life is composed of various routines, whether we like it or not. Some routines are more rigid, some are more flexible but they are still there.

Meal time is, in itself, a routine too. Usually, we will eat the main course before dessert, right? Some foods seem to go naturally together, some not. But those rules and routines are often personal, and specific to each family.

In our household, Wednesday night is called spaghetti night. And it has been the case for many years now. We almost always have spaghetti on Wednesday, and it is funny when we have something else on that day, or when spaghetti is served on another day. Do you want to know why?

Several years ago, when my kids were younger, they were involved in two sports: karate for the boys and rhythmic gymnastics for my daughter. Karate was twice a week: Mondays and Fridays. Gymnastics was 3 times a week: Mondays, Tuesday and Thursdays. Since my job is out of town, i would come home around 5h30 at the earliest, after picking up the kids at daycare or after school. But their practice was always at 6. Around that time, my husband was either in college, and arriving at the same time, or working all week out of town.

Not much time to cook

Our meal plan was often based on how fast something could be cooked. If something could be made ahead of time, and just reheated in the microwave, that was the best. Otherwise, something that would take 15 minutes to cook, would leave us just a few minutes to eat. Yes, i know, it is not good to eat fast but i certainly could not let them starve until after their practice, could I?

At times, i would send the kids to school with an extra lunch that they could eat after school, around 5. It would often be a sandwich, so that could be considered a small meal and maybe they could eat something else after the practice.

The kids always loved spaghetti, and even though in itself, it is not a long meal to prepare (especially since they loved the canned sauce), it still takes time to boil the water and cook the pastas. So, we agreed that we didn’t have time to cook that particular meal on Mondays, Tuesdays, Thursdays or Fridays. So by default, Wednesday was the only day of the week we could make that spaghetti.

The schedule changed, but…

Although the various practices changed schedule somewhat over the years, there was still nothing on Wednesday nights. Eventually, the kids grew older and more independent, and could make dinner before i came home, Wednesdays still stuck as Spaghetti night even if the initial reason for it does not exist anymore. I guess it will just end up as a family tradition!

Do you have food or meal routines that came from a reason unique to your family? Or do you have any particular routine even unrelated to food and meal? Share your story as i am sure reading this post sparked SOMEthing in your mind. And remember mostly to jot it down somewhere, in the comments or in your notebook!

3 thoughts on “Remember when…? – Food routine”