Thank you Rene, I will start investigating how to fix this.  None of the 4 different year PSP’s I have load over two computers (and some older versions my brother in law gave me – not loaded) have the extra stuff.  I have a lot to learn this week.  I have Painter which came with a brush pack, have no idea where to put the files of said brush pack and how to get it as a plug in.  Same with Filter forge.  Wish I was more tech savy.  I should have gotten into computers and not cameras back in the day.  It might be painful, but I’m not giving up.  this is important to learn and understand.

I do have separate files called MY PSP Resources, and I do the file location for those each time I upgrade (or re-install as this case is) and that worked fine.  PSP can find and access them.  That “corel_11” seems familiar to me and I had no idea what it was so I didn’t pay attention to it.  I don’t know why they don’t use the obvious names like they did before.  Like at my husbands work, the head office (who likely have never ever worked in a warehouse) is now call “recieves”….Voyage.  You can cant get much more opposite than that.  Receives is something coming, voyage is something going.  But now I guess when you receive, for example, an amazon package you have gotten a “voyage”.  these youngsters will be looking after us in old age!  We are going to be wearing our diapers on our heads! 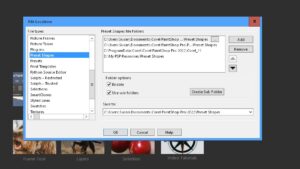