Mary, I moved into a smaller home in Oct of 2018 and at that time I, also, had to wean out my book collection, though it wasn’t as extensive as yours. I think I took 4 or 5 boxes of book to my local library where they put them on sale in their used bookstore. Meanwhile, I had been avoiding buying any physical books and concentrated on my Kindle collection. Which is how I ended up with 745 Kindle books. At least they don’t take up any space.

Here is an update to my first Alphabet layout because I discovered I had missed a set of 5 books from George R.R. Martin, who is very important to me. You might have heard of his A Game of Thrones book which was made into a series on HBO. It is only the first in a series titled A Song of Ice and Fire, now 5 volumes and promised to be 7 all told, but we, his fans, are getting very impatient since the last book came out over 10 years ago! I also changed to a gradient on the monogram.

Edit: I moved the pile of books down to the bottom.

Edit: Hopefully my final edit. This assignment is making me a bit batty! LOL 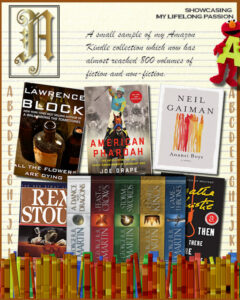