My Day 2.  The Gulf Fritillary, also known as the passion butterfly, is most commonly found in Florida and Texas. They have a defense mechanism in which they release odorous chemicals in response to predator sightings. As a result, common predators learn to avoid this species (I assume that’s why the garden spider in the picture isn’t interested, though the wing of this one seems to indicate it has been through a battle or two.)

I used the provided Cytisia-DCS-Template artsy2 file but made adjustments to the mask and other parts to fit my needs. I opted to use the plaid I made as a border instead of a background so as to not compete with my photo. Fonts I used are Gabriola and Mr DeHaviland. 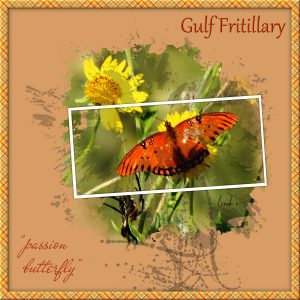