Nowadays you can see many shops that have an English name with an Y in it. Sometimes they are international brands but most of the time it is considered to be “in” or modern to switch to English instead of Dutch. Even people have changed their name as for instance my name Corrie to Corry or Nettie to Netty, Connie to Conny, Bettie to Betty and so on. I have never done so because my name is Corrie whatever the trend may be!

For this layout I took photos in the shopping area and within a couple of minutes I had all the Y’s I wanted; I didn’t even use all of them. I didn’t want all those shopphotos  as they are, but made stripes with the parts that have the Y in it. The background is a photo of a part of the shopping area. I deviated from the font I used on all the other titles because the Y was not very distinct, so this one is Western with Audiga script (as in all the other pages) and Arial for the text. The Dutch text is about the same as in the explanation above. It took me some time to come up with this idea for the Y as in Dutch there are not many Y’s. In the dictionary there is only 1 page about it and that consists mainly of words from other languages. For instance Yankee, Yard, Yoga, Yucca. 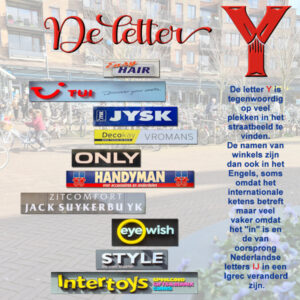