The red flower is from Diamond Tutorial 1. I then became addicted to making flowers.

The orange and yellow flowers are from the same tutorial using a flower petal that I had made and saved in preset shapes. For the yellow flower I gave it some texture before I watched the tutorials on vectors.

The two spiky flowers were made after watching the tutorial on the warp brush.

The purple flower was made using Cass-circle spiral script after a texture was applied after watching the 2nd Vector tutorial. I should have added a shadow to the middle but stupid me only saved the merged file. The center was created using the glitter brush that I had made after watching one of the Christmas lessons that was on YouTube(before joining). Now I would like to learn how to make a petal curl. 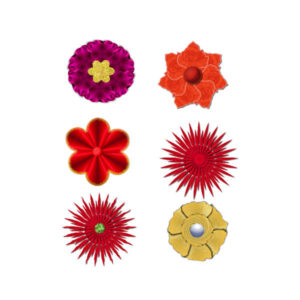