In a little village called Zillis in the Swiss Alps is a very small unsightly church that has a gorgious ceiling of painted wooden panels from the 12th centuary. When I, a teenager, was on holyday there with my parents we took a sightseeing tour and among other things visited that church. I can remember vividly  that my dad was laying on is back in the pews to take pictures of that ceiling. But in later years I forgot all abut it and didn’t remember in what part of Switzerland is was situated. Then my daughter married a Swiss guy and I have been to Switzerland many times since. When I’m there her parents in law always take me on a day out and on one of these days they wanted to stop for a coffee and did so in Zillis. After coffee before we went on and on their part almost as an afterthought said there was a church that they wanted to show to me and it was that church I remembered so well! It was no longer allowed to lay on your back in the pews to take a picture because of the enormous amount of visitors each year. To take pictures of a ceiling while standing upright isn’t that easy I can tell you! 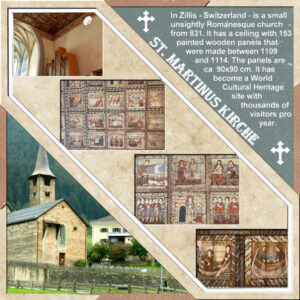