The V is for Vincent van Gogh, what else could it be as he is the most famous resident of my village, although he only lived here for a year. He started drawing here for the first time while staying with his parents. His father was the vicar in the protestant church and that church is now called the Van Gogh Church, where among other things expositions are being held. It even was the council chamber for a couple of years. Young Vincent apparently liked walking and draw up a map of the surroundings and everyting he found interesting. Most of the roads, waterways and other landmarks he  drew are still recognisable today. 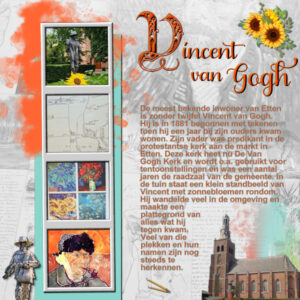