Susan, yes it is a Badger, I have several  that periodically  pass through, some stay, having their sets around and about.   They keep the ground squirrels under control.  It’s called natural predation.  This chap was  digging, to get under the workshop, where there were several families of ground squirrels.  He stayed for  3 days and nights, before moving on.  They are becoming endangered, due to pesticides, and their habitat being eaten up  by humans.   Due to having poor eye sight I give them a wide a berth, as they can be aggressive.  They  are at the top of the food chain.  Stunning powerful creatures, that also live on insects.

For the dirt effect, on the background paper I used the dirt picture tube, which comes with PSP.  Lowering the  opacity 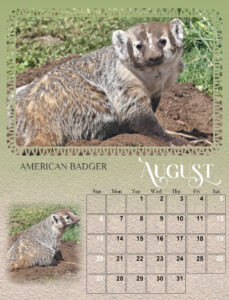