To carry on my daughter theme, we love hats, I used three different pictures of us in hats. I used a combination of mini kits from Pixelscrapper-the background papers, the flowers and one of the other elements. The swirl was created using a brush with a glitter fill. The gold dots were from a free download from DealJumbo which has a lot of free items and fonts. The font is called Protocol FF that was also downloaded from DealJumbo. The stripes were created from a PSP pattern, originally blue, but changed in Hue/Saturation. I put a shadow on my title so that it could be more easily read. Also, instead of placing my photos on top of the glitter paper, I put them behind and cut out where they were situated. I then used bevel on the glitter frame that I had made. The journal letters were a little hard to read on the paper that was chosen, so I added an outer glow using the layer styles. BTW, the drop tool works with layer styles bevel, making it much easier to change colors.

Carole, I have started saving the drop shadow settings for the various items and hope I am getting better. 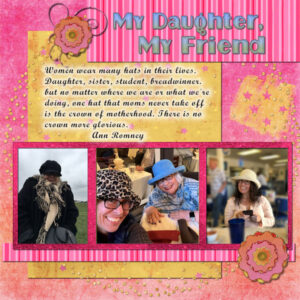