May and June.  I’m getting an idea of a style now.  Gradient background with texture effects.  I tried many versions of the texture from the materials palette.  I like that it’s on a different layer, but I didn’t like the texture it made.  I do like the texture from Effects>Texture Effects>Texture better.  I wish it was on it’s own layer.  I think I’ll duplicate the gradient background and put the effect on one, that way I can decide if I want the texture or not. I added the year smaller in the opposite corner.  I will likely change the Prida 02 Calt font.  Believe it or not most of the glyphs are just typing it out, without using a character map.  I had to go and look in the glyphs for normal letters and it’s a super unorganized glylph section. 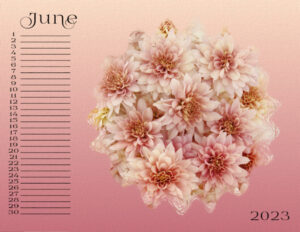 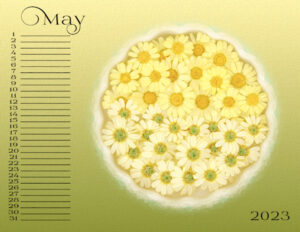