Here is July and August, finished. I got patriotic with July, since Laurey gave me a photo of the Declaration of Independence which was signed July 4, 1776. I used the USA split font so you can use 2 colors. I placed a mat behind it as the background is busy. I tried to add an Outer Bevel to the Photo/Mask Group, and it came out well, I think. August is Abraham Lincoln’s memorial, photo shot at night and from a distance so it was quite grainy. I tried to improve it and think it looks a lot better now. The background is a texture called Letters, which I found appropriate for Lincoln who was known as an effective orator. We had to memorize one of his speeches when I was in high school, “Fourscore and seven years ago …” 😉 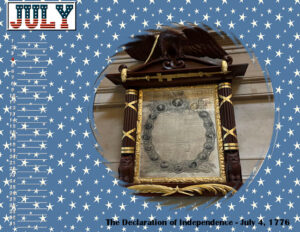 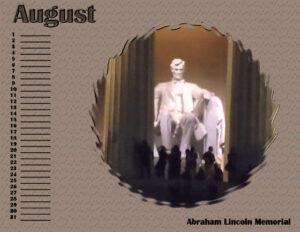