Cassel: No, that was the first King Kong film in 1933. (Yes, they had films that long ago! LOL) He sat through the entire film in a darkened auditorium with his hands over his eyes. Poor Bobby never lived it down!

I’m showing you two movie posters from that year: one that’s pretty scary (in French) and the other because they styled it in Art Deco that was all the rage in the 1930s. 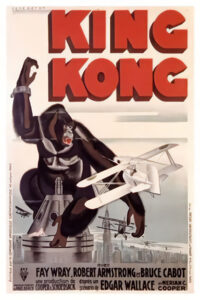