Day 2. I had font issues using the provided template and even after starting over when I figured out the problem, I ended up with a corrupted file and neither of my PSP versions would open it. I did find and was able to get a version of the file with papers only. (And, yes I had been saving it throughout the process. The final save of the file didn’t work and corrupted the file). I lost all of my journaling and shadowing. So 4 hours in, I started over using a template from Scrapping With Liz (Recyclables 44 available at The LilyPad) and a retired kit by Bella Gypsy called Kaleidoscope. And, I actually like the final version better than the first version so I guess that is a win!

I again used the warp brush on element shadows. I use Forte font filled with a paper from the kit for my title and again used an inner bevel instead of a drop shadow. I am finding I really like that effect for titles. 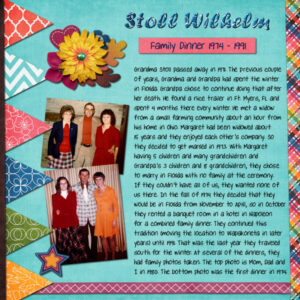