Just as Rene I had some trouble finding something for the letter Q. But in my village as in many others, we have a lot of oaktrees (Eikenbomen) lining streets and in parks and the Latin name for Oak (Eik) is Quercus. In preparation for this letter I took some photos of the Oak. But there is a problem with the trees nowadays caused by a caterpillar that lives only on and around oaks. It’s called the “eikenprocessierups”  or the “oak processionary caterpillar” and its fire hairs are causing extreme itching on peoples bare skin with red spots. When those tiny hairs come in your eyes you have to go a doctor immediately. Among many others it happened to me too and I got special medication to avoid an infection or worse. On many trees in Mai, June and July there are warning ribbons to indicate that there is a nest in the tree and you can see sometimes hundreds of them crawling on the trunk and branches. When they purpate the hairs become airborne and the wind or birds distribute them. At first the caterpillars  were eliminated by spraying the trees with chemicals but that killed all the other insects as well.  A kind of big vacuum cleaner, handled by guys in protective gear, collects them and they are burned to get rid of the hairs for good. Also a lot of trees have nesting boxes for the coletits who happen to love them and feed their young on it.

I used a template from Lab 12-1, but I’m not sure Carole will recognize it after I changed it a lot and in the end it was more a starting point. The acorns were in my stash, the leaves are picture tubes and the background has a wooden texture. 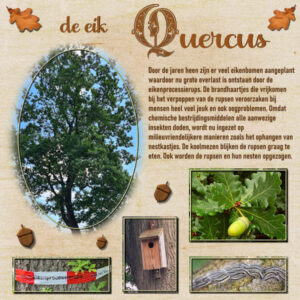