Neat, Jannette, its making me hungry!

L is for my favorite book(s) – Lord of the Rings.  There is so much in them – Tolkein was a really great writer – there is a lot of “meat” in these books.  The papers and the large letter L are mine.  The pictures are from various web sites.  The ring is from Nice Png; the button next to the L was developed from a picture on the web.  The font is Old English.  M is the next letter and is in the middle of the alphabet – it will also be in the middle of my album and it will be at least a double page – M is for Memphis – the town I have lived in most of my life. 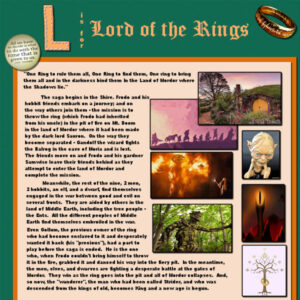 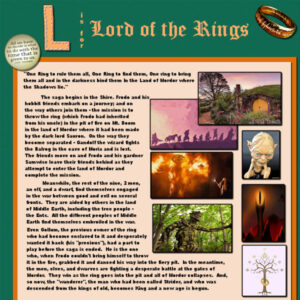