In my first DIY I featured some of my lilies.  I decided to  feature one of my many, now Juvenile Robins. All juveniles have a  spotted breast, the older one are now showing a little  of the adult red breast, which actually isn’t red at all, but orange.   All the Robins, and the Orioles are very clever, they pick out the small fresh blueberries before starting on the grapes.  Because they swallow the blueberries in one gulp, unlike the grapes.  blueberry jam in the  dish.

Photo split, created a wide grungy border for the background paper,  did it on a separate layer  to change the colour, blur  and noise.  Seamless tiled a  blueberries clipart.   Darkened the edge of the top shape, and used the  impasto script, which I won, on the middle shape. Extracted the dish from the photo, as the photo was  far to large to include it in the split photo.  The  bow is an element I colourized. 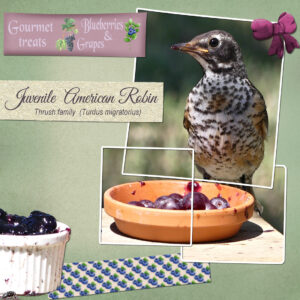