DIY Challenge in the Scrapbook Campus. One of our basketball players has dementia. She really struggled during this tournament. She made two requests to me. 1, she wanted the two of us to take a photo together. 2, she wanted a team photo at the sand sculpture. Both requests were fulfilled. The top two photos are actually 1 photo divided. The background paper was originally a pinky red…I put an orange layer above it and used the blend mode color (L).
We went to the games with 1 player with denentia; one needing a knee replacement and one player who had never played with us…battered, bruised and wounded. The player who had never played with us quit in the middle of the tournament and went home to play in a pickleball tournament. We played the medal round with just 4 players…in senior ball, we play 3 on 3…so one sub and she had dementia. A real challenge…the Senior Games motto is “Long live the challenge.” 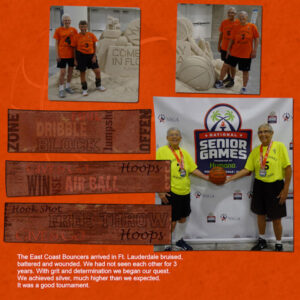